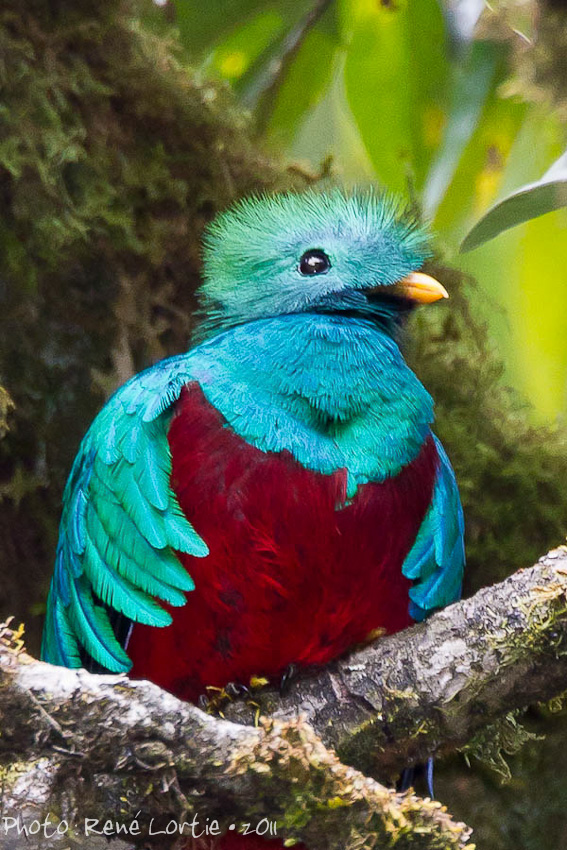 After our brief stay in San Jose, three days in San Gerardo de Dota helped us to familiarize with the environment, wildlife and flora of Costa Rica.

Located in the mountains near the peak of Cerro Muerte at 7,200 feet above sea level, this area is the place to observe the legendary resplendent quetzal. Its cool, moist climate favors this species nesting in decaying tree cavities. The Trogon Lodge where we stayed offers a perfect setting for bird watching and for relaxation surrounded by a fairly lush vegetation. Access, however, is a challenge, because you have to get down on nine kilometers a narrow road winding through the mountains with hairpin turns sometimes quite dangerous.

Click on a picture on the right to display photos in a manual full screen mode slideshow. Then navigate with the left and right arrow keys or by clicking on the signs > or <

The guide at the lodge showed us the immediate environment and its birds, with special attention being given to the quetzal. The land around the cabins is dotted with wild avocado attracting the quetzal that feeds on it in summer. The pond in the middle of the field and the groves of flowers attract many species of hummingbirds.

Myth and legend about quetzal

Excerpt from Wikipedia
The resplendent quetzal was considered divine, associated with the « snake god », Quetzalcoatl by Pre-Columbian Mesoamerican civilizations. Its iridescent green tail feathers, symbols for spring plant growth, were venerated by the ancient Aztecs and Maya, who viewed the quetzal as the « god of the air » and as a symbol of goodness and light. Mesoamerican rulers and some nobility of other ranks wore headdresses made from quetzal feathers, symbolically connecting them to Quetzalcoatl. Since it was a crime to kill a quetzal, the bird was simply captured, its long tail feathers plucked, and was set free. Quetzalcoatl was the creator god and god of wind, often depicted with grey hair. In several Mesoamerican languages, the term for quetzal can also mean precious, sacred, or erected.

Until recently, it was thought that the resplendent quetzal could not be bred or held for any long time in captivity, and indeed it was noted for usually killing itself soon after being captured or caged.[citation needed] For this reason it is a traditional symbol of liberty. However, the Miguel Álvarez del Toro Zoo in Tuxtla Gutiérrez, Chiapas, Mexico has kept this species since 1992, and in 2004 breeding in captivity was announced. A chick hatched and reached the age of six weeks at the time of the report.

The bird is of great relevance to Guatemalan culture, being a character in the widely popular legend of the local hero Tecún Umán, a prince and warrior of the Quiché (K’iche’) Maya during the latter stages of the Spanish conquest of the region. This quetzal was his nahual (spirit guide). The Quiché repelled several attacks from the Spanish army, even though outmatched in weaponry (guns, armor and cavalry against spears and arrows).

Legend has it that on the day the conquistador Pedro de Alvarado fought against Tecún Umán, there was a quetzal flying overhead. On the first strike Tecún Umán, on foot, managed to disable Pedro de Alvarado’s horse. Alvarado was then given another horse and on the second strike ran through Tecún Umán’s chest with a spear. The quetzal flew down and landed on Tecún Umán, dipping its chest in the warrior prince’s blood. It is there that the bird acquired its distinctive red chest feathers.

It is debatable whether these events happened, but the Maya fought fiercely for their land and freedom during the conquest. One Mayan legend claims that the quetzal used to sing beautifully before the Spanish conquest, but has been silent ever since; it will sing once again only when the land is truly free.